A Guide to 18 Premier Fishing Destinations

within a Four County Region of Southwest Virginia: 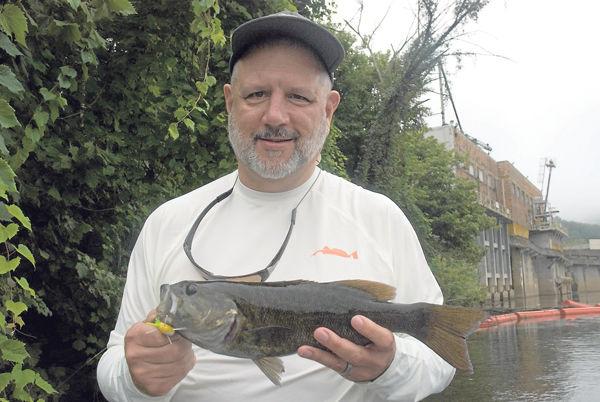 Smyth County and Wytheville tourism officials invited the fly-fishing guru to come to test the waters of the New and Holston rivers.

The author of multiple books and numerous articles on fly fishing isn’t likely to forget Southwest Virginia. He caught his biggest smallmouth bass ever in the New River. The smallie came in at more than 22 inches. Anything that’s 20 inches is considered a trophy fish in the commonwealth.

Beasley, the director of next weekend’s Virginia Fly Fishing & Wine Festival in Doswell, grappled with trout of significant size in the South Fork of the Holston. It got away after breaking the tip of the fly off.

With his experience as a fly fisherman for 25 years and a promoter of the sport, Beasley believes Smyth and Wythe possess a gold mine of sorts in their waterways. “It’s like having liquid money running through your jurisdiction,” he said.

The longtime fisherman and writer believes the region is often “overlooked as a fishing destination because of the famed rivers like the James and Shenandoah and, of course, the Rapidan and other trout fisheries in the National Parks.” However, Beasley contends that “fishing on the South Fork of the Holston in Virginia is an undiscovered jewel.”

As a writer, Beasley plans to share his findings with his readers that can easily number 100,000 plus.

Though long an outdoorsman, the world of fly fishing opened up to Beasley in the back of an ambulance.

He spent 30 years as a firefighter and paramedic for Fairfax County Fire and Rescue, retiring about four years ago from Fire Station 27 as a senior medic and captain.

One day, Beasley was among the emergency responders who answered a call to help a man having trouble breathing. That man was Bob Guess, a renowned fly tying expert.

“On the way to the ER,” Beasley recalled, “we struck up a conversation in the back of the ambulance and he offered to teach me how to fly fish. I met him a week or so later, and found out that I loved it and have been doing so ever since.”

Ever since equals about 25 years.

“Fly Fishing isn’t better than conventional or spin fishing, it’s just different,” said Beasley. “I tell folks fly fishing is to fishing what archery is to traditional hunting…. It’s more like chess than checkers and every advantage goes to the fish.”

Writing about fly fishing came just a few years later. Initially, Beasley didn’t take it seriously, saying he tried it as a lark, but then the proverbial ink got in his blood. “Once I saw my byline, however, I really thought I could introduce more people to the sport through my writing. I have written hundreds of articles and they have appeared in American Angler, Fly Fish America, Blue Ridge Outdoors, Virginia Sportsman, Fly Tyer, Eastern Fly Fishing, Virginia Wildlife and many other publications.”

He’s also written two guide books, Fly Fishing Virginia and Fly Fishing the Mid-Atlantic. Both feature full color maps to let anglers know how to access the rivers and how to fish them.

He’s working on a book chronicling the work of Project Healing Waters Fly Fishing, which helps service men and women adjust to their new lives when they return from military service.

Beasley is currently busy in his capacity as director of the Virginia Fly Fishing & Wine Festival, which, he says, is the only event of its kind in the country. Vendors come from as far away as Argentina and Alaska to participate as well as multiple guides, lodges and manufacturers in the U.S. Among those speakers will be Matt Reilly, who served as Beasley’s guide to the South Fork of the Holston. Jim Richmond of Appalachian Outdoor Adventures guided Beasley in the New River.

He praised both guides, saying that he will recommend them wholeheartedly.

The annual festival takes place Jan. 12-13 this year with attendees coming from upstate New York and Suwanee, Ga., and points in between. (Learn more at http://www.vaflyfishingfestival.com/)

While Doswell will benefit from the festival tourism, Beasley believes Southwest Virginia could share in the tourism dollars that stem from fly fishing. “These communities have a lot to offer fly anglers, especially with the New River and South Fork of the Holston so nearby…. There is a tremendous amount of potential from a business standpoint when attracting fly anglers to the area. The New River alone you could fish for weeks and not fish the same place twice. It’s like having liquid money running through your jurisdiction.”

Beasley noted that the money associated with fly-fishing tourism is more than pocket change.

“The demographics of most fly anglers are consistent with folks that make well over $100,000 a year, and like to travel,” he said. “When in the area they book guides, stay in B&Bs or hotels, and, of course, have to go out to eat. If they like the area enough, it is also conceivable that they would purchase a cabin or second home so they could visit the area more often.”

Noting that he was so impressed with his accommodations – the Bolling Wilson Hotel and Collins House Inn, Beasley plans to bring his wife the next time he visits.

Beasley pointed to a recent report done for the American Sport Fishing that indicated that $41 billion was spent on freshwater fishing last year.